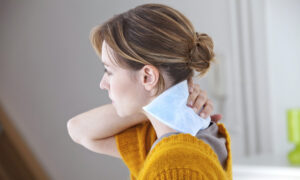 Many of us have felt the ache of a thrown-out back or a sore jaw that makes chewing difficult. This pain, though sometimes agonizing, usually resolves on its own and is referred to as acute pain. But in some cases, acute pain becomes chronic and persists for months or years, and scientists don’t entirely understand why.

Researchers have long thought that inflammation, a key part of the body’s healing process, when excessive or prolonged, is somehow involved in the switch from acute to chronic pain. But a new study turns that thinking on its head, finding that inflammation, rather than contributing to the development of chronic pain, appears to help curb it. The NIDCR-supported study, published in Science Translational Medicine, suggests that painkillers that work by suppressing inflammation might be counterproductive for relieving pain in the long run. The results also lend new insights into healing, potentially explaining how activities that stimulate the immune system to produce inflammation—such as exercise, massage, and heat therapy can often help resolve pain.

“It turns out, acute pain is a very active biological process, and developing chronic pain is the absence of this process,” says senior author Luda Diatchenko, MD, Ph.D., a human geneticist at McGill University, Canada. “We should be careful with inhibiting our immune response at the acute stage, understand the consequences, and pay more attention to pain resolution.”

Diatchenko wanted to know why some patients’ pain simply fades away, while others’ stubbornly persists. Her team decided to focus on low back pain, one of the leading causes of disability in the world. The researchers sampled blood from 98 research participants when they first developed low back pain and again three months later. By that time, half of the volunteers had developed chronic low back pain, while the other half had recovered. By comparing biological markers in blood cells between the two groups, Diatchenko expected to find that chronic pain sufferers would have greater activation of genes that stir up inflammation and are thought to fuel chronic pain. But the results took her by surprise. Nothing much was happening in patients who developed chronic pain.

“It was kind of frozen, in terms of their gene activity,” Diatchenko says. “But in patients who recovered, we saw enormous activity happening. More than half of their genome changed expression.” Cells from the recovered volunteers were initially buzzing with activity from inflammation-related genes, and this activity gradually diminished over the three months of the study. In contrast, the chronic pain group started out with less inflammatory gene activity, which did not change over time.

The researchers observed similar results in a cohort of 64 research participants with another common musculoskeletal pain condition called temporomandibular disorder (TMD), which affects the jaw joints and muscles. In the TMD group, people who ultimately recovered also had initially intense inflammatory gene activity that receded over time, suggesting that inflammation in the acute phase might protect against chronic pain.

When Diatchenko shared the results with her co-author and McGill colleague, pain researcher Jeffrey Mogil, Ph.D., he was in disbelief. For decades, scientists have known that inhibiting inflammation relieves pain. But there’s a caveat—Diatchenko and Mogil realized that people and animals given anti-inflammatory treatments in prior studies had not been followed long enough to know what happens beyond the immediate period of pain reduction.

Mogil set out to investigate Diatchenko’s findings in mice with pain states similar to humans’. Over six days, the animals were given saline as a control, or dexamethasone, an anti-inflammatory steroid commonly prescribed for lower back pain.

Although dexamethasone at first blunted animals’ pain responses by blocking the inflammatory immune response, the pain eventually returned and became chronic, lasting in some cases up to 120 days. For mice that received saline, pain responses generally subsided in about half that time. The team also saw prolonged pain in mice treated with diclofenac, a non-steroidal anti-inflammatory drug (NSAID) in the same class as the over-the-counter painkiller ibuprofen. But mice did not develop persistent pain when they were given drugs that suppress pain without altering inflammation.

To better understand whether the findings could apply to humans, the researchers turned to the UK Biobank, a database of health information and genetic data from half a million participants in the UK. An analysis of 2,624 people with acute back pain showed that those who reported taking NSAIDs were 1.7 times more likely to develop chronic back pain than those who didn’t, adding evidence to the importance of inflammatory responses for pain recovery.

Taken together, the findings suggest that instead of causing prolonged pain, robust inflammatory responses that quickly disperse could be the key to warding off chronic pain. Results of the study also imply drugs that lull inflammation may be disadvantageous for pain recovery.

“To me, the study is interesting because it gives us a new direction of how we can look for drug targets,” says Diatchenko. “We always think about what we can inhibit, but our data says we should enhance immune responses in patients.”

Diatchenko notes that the study might explain why exercise and physical therapy are highly effective for people with musculoskeletal pain such as low back pain and TMD. These treatments stimulate mild inflammatory responses throughout the body.

“A lot of people’s immediate response to our study was ‘Oh my goodness, we shouldn’t use these anti-inflammatory drugs,’ but I don’t suggest people drop it right now,” says Diatchenko. Although the data suggest that inflammation could protect against chronic pain, “our data in humans were only a correlation rather than causation, and we really need clinical trials to know for sure.”

“Inflammation May Curb, Not Cause, Chronic Pain was originally published by the National Institute of Dental and Craniofacial Research.”

Dogs Can Be Trained to Sniff out COVID-19