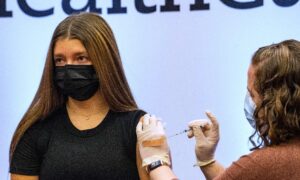 An Israeli study found that a fourth dose of the Pfizer COVID-19 vaccine doesn’t offer long-lived protection against the Omicron variant of the CCP virus.

Using Ministry of Health data on more than 1.2 million people, researchers found that a second booster dose of the BioNTech-Pfizer vaccine offered protection against significant COVID-19 infections for six weeks. But protection against all virus infections started to drop quickly after four weeks and nearly disappeared after eight weeks, according to the study, which was published in the New England Journal of Medicine.

The researchers, however, said that there appears to be some benefit conferred by a second booster, or fourth dose, of the Pfizer vaccine.

“Overall, these analyses provided evidence for the effectiveness of a fourth vaccine dose against severe illness caused by the omicron variant, as compared with a third dose administered more than 4 months earlier. For confirmed infection, a fourth dose appeared to provide only short-term protection and a modest absolute benefit,” the study’s authors wrote.

“In our study, a fourth dose appeared to increase the protection against severe illness relative to three doses that were administered more than 4 months earlier,” they added.

The authors further stipulated that because the study only covered a two-month period, it’s not clear if the vaccine protects against severe illness faded after eight weeks. More studies and follow-up research is needed to make a clear determination, the study said.

The study also focused on adults aged 60 and older. It did not provide data on the second booster’s efficacy on younger groups.

Their findings come as policymakers publicly debate if Americans need additional booster shots. The U.S. Food and Drug Administration (FDA) held a panel of advisers on Wednesday on the extra COVID-19 vaccine shots.

In March, the FDA issued an emergency use authorization for second boosters of the Pfizer and Moderna shots for individuals aged 50 and older as well as immunocompromised people aged 12 and up. The drug regulator also authorized giving an mRNA vaccine booster for those who received the Johnson & Johnson COVID-19 vaccine, which uses an adenovirus.

Several weeks ago, Israeli researchers found in a separate preprint study that the protection from a second Pfizer booster quickly diminished.

Protection against infection rose initially after the fourth dose, reaching 64 percent during the third week, but it rapidly declined to 29 percent by 10 weeks, they found.

“It appears that effectiveness of the fourth dose wanes sooner, similarly to the fact that the third dose wants sooner than the second dose,” the study said.

Recovering From the Pandemic Aftershock

The Dividends of Practicing Patience