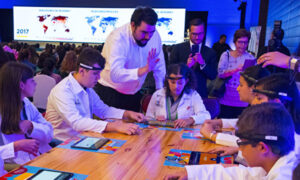 As people age, it is believed that brain activity becomes sluggish and some people become not as quick to think and react as they once were.

Researchers in Germany found this belief was partially true. Published in the monthly scientific journal Nature Human Behaviour, their study found that the brain’s processing speed begins to decline after the age of 60, but not so much before then.

Mischa von Krause, a research psychologist with Heidelberg University, led a team in constructing an online study to examine people’s cognitive response speed and accuracy. The study involved over 1.2 million participants aged 10 through 80. They were separated into several groups according to their age. Then each participant was asked to categorize words or images as they briefly appeared on a screen. Their responses were provided using keystrokes while the researchers measured the speed and accuracy of the responses.

Von Krause’s study determined that people closer to age 20 had the fastest responses. But after examining the data more closely, the researchers also noted that 14- through 16-year-olds demonstrated faster mechanical movements. Their younger bodies functioned a bit faster.

The data further suggested a person’s cognitive response speed decreases in the years 30 through 60. However, the participants within these age groups exhibit fewer errors as they age when providing responses. The researchers also observed that, as people age, the speed at which their brain understands and responds to events remains stable. The study referred to this as a person’s mental speed and it begins to gradually decline after the age of 60.

Based on the outcomes of this study, the researchers inferred that at 20 years of age, a person’s impulses start to become less frequent and their physical reflexes gradually begin to decline. However, the researchers did not attribute this physical and mental slowdown to the brain growing older. Instead, they believe older people tend to be more cautious or deliberate in how they view the world and react—unlike 20-year-olds, who tend to sacrifice the accuracy of their responses for greater speed.

Overall, von Krause’s study found that after the age of 20, a person’s cognitive ability to make decisions remains consistently stable regardless of gender, nationality, and education. Yet, although seniors—60 or older—generally exhibit a decline in mental speed, there are some who still manage to have fast reaction times. The implication is that everyone is different, even when they belong to the same age group.

In an appraisal of the study, Dr. Kaku Xia, a physician with the University of Tokyo, told The Epoch Times that the inferences from this large study were based on indirect evidence using non-traditional means, compared with previous brain studies. Evidence that is more directly impactful to a person’s age and cognitive speed would be helpful in making sound inferences, he said.

A similar observation about von Krause’s study was made by Ritsugaku Ken, a traditional Chinese Medicine physician with the Japanese Oriental Medical Association. In speaking with The Epoch Times, he said cognition is a very complex process and the von Krause study used only one test method. The inferences provided were based on averages, when the differences between people can vary greatly.

Caring for the Heart and Kidneys Can Refresh Brain Functioning

Ritsugaku also said, from the Chinese medical point of view, cognition, emotion, and memory are not only discussed in terms of the brain, but also in terms of the heart and kidneys. These are directly related factors von Krause’s study did not take into consideration.

He suggested a person’s brain cycle is attributed to the heart, which is the master of the whole body and its functions. This includes the human spirit, consciousness, and thinking.

Bone marrow is an important organ for blood production and immunity, and is hidden in the bones. According to Chinese medicine, marrow is produced from kidney essence and is connected to the brain. It has the function of nourishing the bones as well as the brain. When a Chinese medicine physician says a patient has “kidney essence marrow deficiency,” this means the brain’s marrow is empty and the brain lacks nutrition. To refresh the health of the brain and improve the speed of its functioning, he says it is best to start by “protecting the heart and caring for the kidneys.”

It’s Madness What Is Happening to College Kids