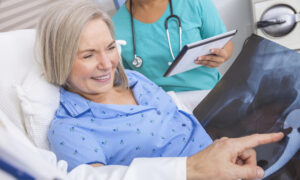 Clues from a blood sample can predict how quickly patients who have had hip-replacement surgery will make a full recovery, according to a new study.

Researchers hope the blood test will provide insights into things patients can do before and after surgery, such as adhering to a special diet or exercise routine, that may help them regain full mobility.

The findings may also help clinicians more accurately evaluate patient recovery after surgery. Currently, physicians gauge patients’ recovery by asking them questions about pain and physical activity, among other things.

But these surveys are subjective, says Nima Aghaeepour, an assistant professor of anesthesiology, perioperative, and pain medicine at Stanford University, and it requires a lot of guesswork to interpret the responses.

“We needed to find a more reliable, data-driven method to anticipate the precise needs of patients as they get back on their feet after surgery,” says Aghaeepour.

In their search for a molecular harbinger of surgical recovery, the team enrolled 49 hip-replacement patients, ages 57-68, and asked each to don an activity-tracking smartwatch before and after their procedures.

Before the surgery, each patient also underwent a blood draw, which the researchers analyzed using techniques that parsed cell subtypes, as well as the cells’ activity.

Using the smartwatch data and information from the pre-surgery blood draw, the team devised an algorithm that could accurately predict how swiftly patients would get back on their feet. Overall, those whose blood tests showed the strongest immune function prior to surgery recovered 34% faster than those with weaker immune function.

The algorithm’s predictive power relied largely on the activity of myeloid-derived suppressor cells, a type of immune cell. But the researchers weren’t simply looking for this cell’s presence; they also were measuring its activity when exposed to a molecule that mimics an infection. Higher activity levels correlated closely with quicker recovery times.

While the study’s data is preliminary and applies only to hip replacement surgeries in people around age 60, the researchers suspect that the findings will generally apply to patients of various ages undergoing different procedures.

“My expectation is that there will still be a strong connection between the immune system and recovery, but exactly what that connection will be is still to be determined,” Aghaeepour says. The researchers plan to investigate other patient populations with the same blood test and smartwatch approach.

They are not yet using the predictive data to inform patient care, but the ultimate hope is that anyone waiting for a surgical procedure will receive the blood test to guide the smoothest, fastest recovery.

The study appears in the journal Annals of Surgery. Additional researchers from the University of North Carolina at Chapel Hill and Stanford contributed to the work.

This article was originally published by Stanford University. Republished via Futurity.org

A New Method for Starving Deadly Brain Tumors to Eradicate Them

5-Minute Instant Trick to Get Rid of That Stubborn Headache: No Painkillers Used