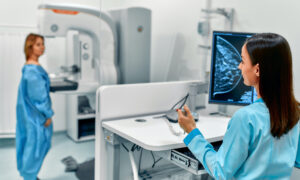 When abnormal cells are detected inside the milk duct of a woman’s breast, she faces a difficult dilemma. Does she have surgery and possibly radiation treatment due to the relatively small risk that they become cancerous, or does she forgo treatment in hopes that she falls in the majority for whom these cells pose no serious risk?

M.T. is a 42-year-old mother of three who had no family history of breast cancer. She’s had yearly mammograms since she turned 40. This time, the results came back suspicious with “microcalcifications.” She underwent an ultrasound-guided biopsy that showed the presence of these abnormal cells in her milk duct, which is known by the medical term ductal carcinoma in situ (DCIS). M.T. was left with a difficult decision. She was advised by her breast cancer specialists to have either a lumpectomy (localized excision of the area) or a full mastectomy. During this same week, I had another patient, C.R., a 49-year-old mother of one who had the same findings.

Neither of these women had any family history of breast cancer. M.T. chose to have a drastic bilateral mastectomy with breast reconstruction. C.R. chose the lumpectomy with localized radiation therapy, which is the routine treatment for women with DCIS.

These two brave women made very difficult decisions. They both had careful discussions with several cancer specialists as to what their best options would be.

The National Institutes of Health estimates that about 1 million women have the diagnosis of DCIS, up from about 500,000 in 2005. This is all due to the better quality imaging and diagnostic capabilities of mammography. The mammogram finds these suspicious microcalcifications that require a needle biopsy to confirm the diagnosis. The American Cancer Society calls DCIS a noninvasive or pre-invasive breast cancer.

So what should a woman do when given such a diagnosis? Not an easy question to answer at all.

Currently, the common recommendation is to do a lumpectomy with localized radiation therapy.

The differential diagnosis is significant, though. The pathologist will be looking for micro-invasive breast cancer, atypical ductal hyperplasia, lobular carcinoma in situ, and possibly more.

While lumpectomy with localized radiation therapy is the go-to treatment, there are other considerations to take into account.

A 2015 observational study published in JAMA Oncology looked at 100,000 patients with DCIS and found lumpectomy and mastectomy resulted in similar 10-year breast-cancer-specific mortality.

Mastectomy is curative for more than 98 percent of patients with DCIS with a recurrence of 1 to 2 percent after mastectomy. However, the risk of DCIS in the other breast is 1 percent for every year of life.

Prophylactic mastectomies are a very drastic measure for a stage zero breast cancer in which 75 percent never advance to invasive cancer. I rarely support such a drastic measure. All patients with DCIS will require very close observation, and in the unlikely chance that the situation worsens, a more profound treatment plan can be done with no decrease in life expectancy.

As you can see, the information gets quite confusing, and the trust you have with your breast cancer team is paramount to success.

I’ve gotten deep into the weeds here, but the bottom line is that DCIS has a very high cure rate of 94.5 percent, according to Breast Cancer Research Treatment. While DCIS can be serious, there are many non-drastic measures available.

Twenty percent of breast cancers diagnosed in the United States are DCIS. The increase in cases over the past 10 years is due to diagnostic capabilities, not anything found in the water or food. It’s very rare to be found in women younger than 30 years of age. The risks of developing metastases or death in a patient with pure DCIS is less than 1 percent according to research published in the Annals of Surgical Oncology in 2011.

More than 90 percent of all cases of DCIS are detected only by mammography, followed by a biopsy. Breast ultrasounds and MRI don’t pick up DCIS. Those modalities are used to find other types of cancers in the breast.

The risk factors for DCIS are similar to other breast cancer risk factors, such as family history, an increase in breast density found on mammography, obesity, never having had a child, and having a child much later in life. Having the deleterious genetic mutations found in BRCA1 and BRCA2 also puts women at much higher risk. Those women’s treatment plans are also different and need special attention. Only about 10 percent of breast cancers are genetic in origin, according to the American Cancer Society.

My patient M.T. chose to undergo a bilateral mastectomy with reconstruction due to several factors. She had a second biopsy in a different area of the same breast showing more DCIS. She also has a very strong fear of breast cancer. She met with several breast surgeons and cancer doctors. This was the right decision for her and her alone.

C.R. chose the traditional lumpectomy with localized radiation therapy. She was comfortable knowing the likelihood of her dying from this was very small, and she was comfortable with very close observation for the rest of her life. Again, this was the best decision for her alone.

I did have another patient in 2020 who chose a completely different path. She’s a very intelligent woman, as were M.T. and C.R. She chose no treatment, since, as I stated earlier, this is stage zero breast cancer. She was comfortable knowing that 75 percent of DCIS will never become invasive breast cancer. She elected to quit all alcohol, eat healthy, exercise, and watch very closely for any progression. She has been getting mammograms twice per year. She also had another recent core biopsy showing no change. This was the patient’s decision, with a strong supporting team around her.

The final and most important thing to remember here is that for the vast majority of women with the diagnosis of pure DCIS, a prophylactic bilateral mastectomy isn’t the best treatment. It’s overkill, to say the least. The exceptions are for those who carry the BRCA1 and BRCA2 genes. Almost all patients who choose this drastic measure underestimate how major of a surgery this is and that the cosmetic results never end up looking like had they imagined.

The good news is that the medical community is trying to find better ways to predict which instances of DCIS are likely to become invasive. For the majority who face no risk, this will relieve them of worry and unneeded treatment.

Voltaire once said, “The art of medicine consists in amusing the patient, while nature cures the disease.”

Some doctors should take heed.

6 Things To Know When Selecting a Complementary Health Practitioner