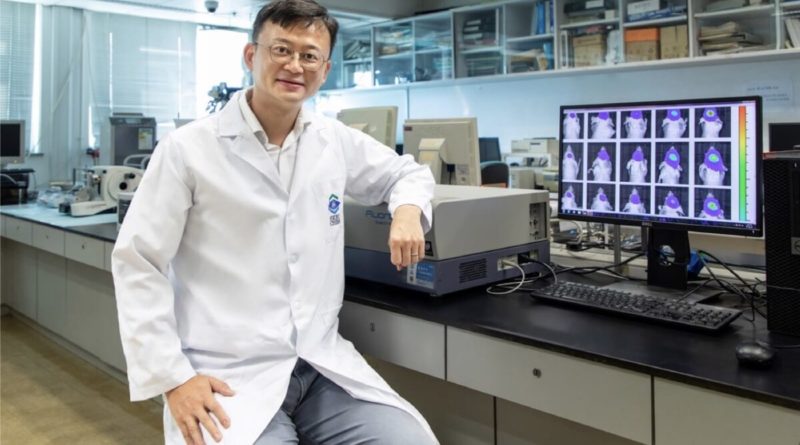 
A collaborative research team from Hong Kong Baptist University and Polytechnic University has synthesized a nanoparticle called TRZD, which can simultaneously diagnose and treat gliomas in the brain. The research results have been published in the international scientific journal Science Advances.

Gliomas are the most common primary brain malignancies, accounting for approximately one third of all brain tumors. Magnetic resonance imaging (MRI) is most commonly used for diagnosing gliomas. But due to its limited sensitivity (in the spatial resolution and short penetration depth), it is usually not able to detect cerebellar gliomas until after the appearance of clinical symptoms.

For the treatment of gliomas, doxorubicin is an effective chemotherapy drug, but it may damage normal cells and cause a series of side effects.

In order to diagnose and treat gliomas earlier and improve the clinical efficacy of doxorubicin and reduce its side effects, a research team led by Assistant Professor Wang Yi of HKBU’s Department of Chemistry, and Professor Law Ga-lai of PolyU’s Department of Applied Biology and Chemical Technology has synthesized a near-infrared (NIR) persistent luminescence (PL) nanoparticle called TRZD. This novel NIR PL nanoparticles can serve both as a drug carrier for imaging diagnosis and treatment of glioma at the same time.

The characteristic of TRZD is that it will continuously emit near-infrared rays after being irradiated by ultraviolet light. TRZD is basically a set of nanoparticles loaded with porous silica, making it an ideal carrier for doxorubicin particles. Its surface is coated with red blood cell membranes for stability and embedded with T7 peptides.

T7 peptide has a high affinity for the transferrin receptors, which are widely distributed on the surface of tumor cells and thus helps TRZD to penetrate the blood-brain barrier (BBB).

The research team first evaluated the efficacy of TRZ (TRZD without doxorubicin) in the imaging diagnosis of glioma through a mice model. TRZ was first irradiated with ultraviolet light, and after glowing, it was injected into mice whose cerebrum and cerebellum had been implanted with tumor tissues. During the next 24 hours, light emitted by TRZ could be visibly detected at the tumor site in the mice.

The results show that the red blood cell membrane coating stabilizes the nanoparticles, prolongs the efficacy of TRZ, and slows its natural absorption by the body. On the other hand, T7 peptide helps TRZ penetrate and accumulate in tumor cells and enhances its imaging function of glioma.

Dr. Wang pointed out that it is difficult to detect gliomas with existing diagnostic methods, but his experiments show that TRZ is a highly potential bio-imaging agent for diagnosing gliomas. The results are encouraging, and TRZ may provide timely and accurate diagnosis in due course.

The research team used a group of mice whose brain and cerebellum were injected with tumor tissue to further evaluate the anti-tumor effect of TRZD. Fifteen days after being injected with TRZD, their tumors shrank to an average of 1 millimeter in diameter, and their average lifespan was 20 days longer than that of the control not injected with TRZD. In addition, cell death was concentrated in just the tumor region, while normal brain tissue was not affected.

Dr. Wang believes that the above experiments show that TRZD is highly targeted for the treatment of glioma. This is because T7 peptide has a high affinity for receptors on the surface of tumor cells and can penetrate the blood-brain barrier, allowing doxorubicin to be delivered to tumor cells more precisely. Since the application of doxorubicin can be more targeted, the dosage and side effects are also expected to be minimized.