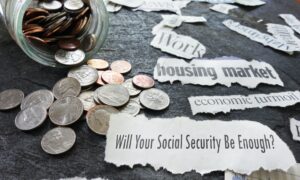 I don’t know how you folks get by without being scared out of your wits by misleading Social Security stories you read in newspapers or see online. Because I know the subject so well, and because I can decipher the confusing and sometimes scary Social Security-related muck that’s out there, it doesn’t bother me. But I can see where a Social Security layperson could get worried or fooled by so much of what is seen in print or online.

Just last week, I wrote a column in which I tried to clarify the points made in an article that had this headline: “Social Security Mistakes That Could Cost You a Fortune.” Almost all the information in that column was rather mundane stuff that most people already know. And even not knowing it wouldn’t have led to a series of fortune-costing mistakes.

And just a couple hours after I submitted that column to my editors, I was reading the online version of a major national newspaper and saw this headline: “Attention Seniors: 4 Big Social Security Changes Coming in 2023.”

When I first read that headline, even I kind of panicked. I thought: “Oh my gosh! I always stay on top of this Social Security stuff. And I haven’t heard anything about Congress making any big Social Security changes that would go into effect next year!” So, I could only imagine the confusion and maybe the anxiety that such a headline could cause most retirees.

But then I opened the story and read it. And guess what? These “big changes” are just routine updates that happen to the Social Security program every year. So, why the provocative and misleading headline? In some ways, I get it. If the newspaper had used the headline “Routine and Boring Social Security Updates for 2023″—well, no one would have read that story. But the attention-grabbing “big changes” headline draws people (including me) in. It does work. But it’s still misleading.

So, what are the “big changes” upcoming in 2023? Of course, first, there will be the annual cost-of-living-adjustment (COLA) in January. And because inflation has been running high, the next COLA will also be high. It’s supposed to be around the 10 percent mark.

Instead of just announcing the upcoming COLA, this national newspaper could have done their readers a real service and answered the question that everyone has been asking me. And that question usually goes something like this: “I was planning to wait until I reach my full retirement age later in 2023 to file for my Social Security. But I want to get the benefits of this projected big COLA. So, do I have to file for reduced early benefits in 2022 in order to get the 10 percent increase in my benefits in early 2023?”

And the answer is no. If you aren’t getting benefits when the COLA comes out (i.e., in January 2023), the same COLA increase is built into the Social Security benefit formula for future Social Security recipients.

The next “big change” the newspaper hyped is the routine and annual increase in the wage base—the amount of income subject to the Social Security payroll tax. That limit is $147,000 this year and will automatically increase next year (based on increases in the national average wage index)—as it has gone up every year for the past 30 years or so.

Of course, this change doesn’t affect most people reading this column. It only affects those who are still working and making more than $147,000 per year. So, if you’re in that boat, I suppose you could classify this as a “big change.” But it’s absolutely not a surprise or an unexpected change.

And, finally, the fourth “big change” is the increase in the earnings penalty limits for Social Security recipients under their full retirement age who might be working part-time. The limit is currently $19,560. For every two dollars you earn over that limit, one dollar is withheld from your Social Security benefits. But once again, the update to the limit is an automatic increase that has happened every year for the past 30 years or so. It isn’t a big deal. It isn’t a big change. And frankly, it just isn’t news.

And speaking of misleading Social Security-related “news” stories, sometimes they are so downright silly that I hope most of my readers can understand that they’re totally bogus.

For example, there were lots of reports—all from the same questionable source—on the day I’m writing this (in early August) that carried headlines similar to this one: “Biden Authorizes Border Patrol Agents to Hand Out Social Security Cards to ‘Illegal Immigrants’ Crossing the Mexican Border.”

Oh, yeah. And did you know agents are also giving them a Wells Fargo Visa card, interest-free mortgage loans, a new car, and a box of chocolates? This isn’t happening, and I hope all my readers are smart enough to realize that.

I know some folks like to think of the federal government as this one huge, monolithic entity in which all employees are just cookie-cutter bureaucrats following the mantra of an appointed leader. That just isn’t how it works. There are hundreds of federal agencies, each with their own staff and with their own mission.

SWIFT Ban Is a Major Blow on Russia and Puts China in a Dilemma: Experts