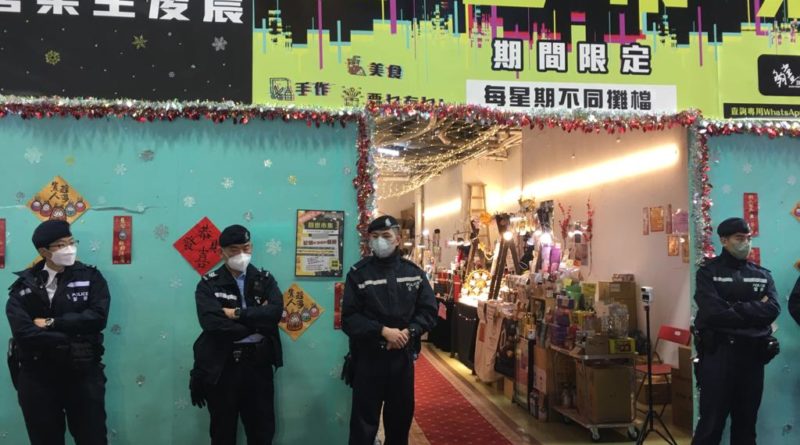 The booth in the case is “Shame On You Grocery Store,”  in the Hermitage Bazaar in Mongkok, which was part of the yellow economic circle (businesses in Hong Kong that support the 2019–2020 protests in the city).

According to its Facebook page Shame On You Grocery Store, it recently published a picture book about the social movement between June 2019 and February 2020, including demonstrations and strikes. The book’s cover page was the Siege of the Chinese University of Hong Kong, and a flag emblazoned with the now-banned slogan “Liberate Hong Kong, Revolution of Our Times.” In addition, the store also has T-shirts with red QR codes that mock the Hong Kong government’s pandemic policy, and graphics from “Sheep Village Drawing Book,” which is deemed seditious and has been banned.

The Mongkok fair, organized by Dare Media and Be Water Alliance, started to recruit booth owners and consignments on Dec. 2, 2022. The fair sells face masks, Chinese lucky messages, and other products at Ginza Plaza in Mong Kok and is planned to be open until Jan. 30.

Wu Chi-wai, Lam Cheuk-ting, and Andrew Wan, former members of the Democratic Party, also had a booth selling products like badges. lucky bags, and Pu’er tea cakes at the fair.

The police sent many officers to cordon off the scene to search and stop the public from entering the fair.

One of the booth owners, Mr. Pan, said the police arrived at around 6 pm and went straight to the booth in question to search. Pan said that the booth was selling T-shirts and boutique items, but he was unclear about the messages on the T-shirts. He also said the police claimed the search would take 20 minutes but took two hours. In addition, they did not explain the details of their operation. Mr.Pan said they affected his business.

Another booth owner Ms. Kwang said that the police first asked questions after they arrived on the scene and then cordoned off the area. The police took away three women from the scene.

Responding to an inquiry from The Epoch Times, the police said they conducted the operation at Kowloon and New Territories District on Jan. 17, and three males and three females, aged 18 to 62, were suspected of committing the crime of “doing an act or acts with seditious intention.”

The police said the six arrestees were “members of an anti-government organization.” It also accused the group of producing and publishing seditious books advocating “Hong Kong independence, inciting others to overthrow the central authorities and Hong Kong government, and inciting persons to use violence and counseling disobedience to the law or any lawful order, and so on.” The police also claimed the booth had many items for sale that “glorified violence and carried anti-government motifs.”

According to the court warrant, the police searched the shops and printing shops of the organizations in question, and the homes of those arrested. In addition, 43 books and other items were seized.

Along with the police, the Customs and Excise Department personnel went to Mong Kok to investigate but did not arrest anyone. 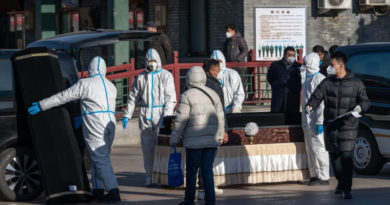