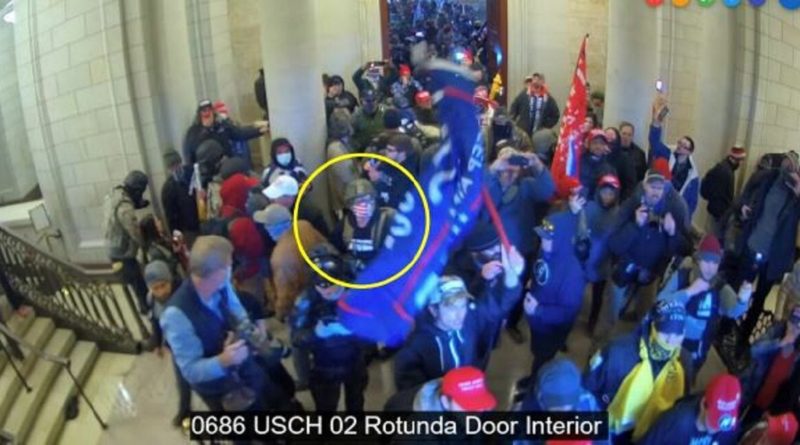 
A man who allegedly entered the U.S. Capitol on Jan. 6, 2021, is now being accused of conspiring to kill FBI agents.

Edward Kelley, 33, has been charged with conspiracy, solicitation to commit a crime of violence, and other charges, according to a criminal complaint unsealed on Dec. 16.

Kelley, of Tennessee, had been free on personal recognizance after being arrested and charged in May with crimes related to the Capitol breach, including assault, destruction of government property, and disorderly conduct.

According to the new complaint, Kelley had identified dozens of law enforcement personnel involved in the investigation into him. A witness who later approached authorities in Maryville was part of a meeting between Kelley and Austin Carter, another Tennessee man, on Dec. 3. During the meeting, Kelley stated that they were going to “mainly conduct recon missions and assassination missions,” according to the witness.

The witness “understood KELLEY’s statements to be referring to assassinations,” according to the complaint.

Ten days later, Carter and the witness were working together at an unidentified place of employment when Carter gave an envelope to the witness, the document states. Carter said to open it later and burn it when finished. Carter said he received the envelope from Kelley.

When the witness left and opened the envelope, the witness found the list and a thumb drive, according to the complaint. Within hours, the witness contacted law enforcement.

The witness, who was not identified, then agreed to tape conversations with Kelley and Carter. During one of the calls, Kelley purportedly said that if he was arrested, to “start it,” adding, “You guys are taking them out at their office.”

“If the same thing happens to any of you guys, I’m doing the same thing, okay?” Kelley was quoted as saying. He later answered yes when the witness inquired if he was talking about the Knoxville office.

A lawyer representing Kelley did not return a request for comment.

“Mr. Carter maintains his innocence and we look forward to zealously defending him against these allegations,” Joshua Hedrick, an attorney for Carter, told Reuters.

Both Kelley and Carter have been taken into custody, according to the court docket.

“Today’s allegations that individuals sought to attack and hurt or kill FBI personnel are sickening. FBI employees honorably perform their duties protecting the American public and upholding the Constitution and they should be able to execute these duties without threats of violence,” FBI Director Christopher Wray said in a statement.

Kelley has said he attended the Trump rally on Jan. 6, 2021, in Washington. He traveled to Washington from Tennessee with another individual.

Kelley spoke twice with FBI agents in June 2021 to discuss the trip, according to court papers. Kelley said he walked around the outside of the Capitol but did not enter the building.

But photographs and surveillance video showed Kelley did enter the building, according to an FBI agent.

Kelley, wearing a black hooded sweatshirt, a dark tan backpack, a gas mask, and a green tactical helmet moved from the Peace Monument and helped others throw a U.S. Capitol Police officer to the ground, according to the images. He allegedly broke a window at the Capitol and entered the building through the broken window.

Kelley was part of the group who asked officer Eugene Goodman where lawmakers were counting electoral votes. Goodman led them away from the Senate chamber, but Kelley and others eventually entered the chamber’s gallery.

Kelley was later spotted in the Capitol rotunda before exiting the building. He was inside for about 40 minutes, the agent said in an earlier complaint.

Kelley was charged with assault, unlawful entry, obstruction of law enforcement during civil disorder, and other counts.

Kelley has pleaded not guilty.

In the order setting conditions for his being free while the case is ongoing, Kelley was ordered not to violate federal, state, or local law.

Marina Medvin, who had been representing Kelley in the Jan. 6 case, entered a motion to withdraw on Friday. In the brief motion, Medvin said that she and Kelley were jointly seeking the withdrawal.

“This is a felony matter that is currently still assigned to a Magistrate Judge (although an indictment is expected to be docketed next week), there is no trial date, the defendant’s case will not be delayed, and the withdrawal is not expected to have a material adverse effect on the interests of the client or his case,” Medvin wrote. “Mr. Kelley will seek for this court to appoint counsel for all future proceedings.”

California Expands Medi-Cal to Adults 50 and Older, Regardless of Immigration Status

Inflation and Household Spending Expectations in the US Remain High: Fed Survey