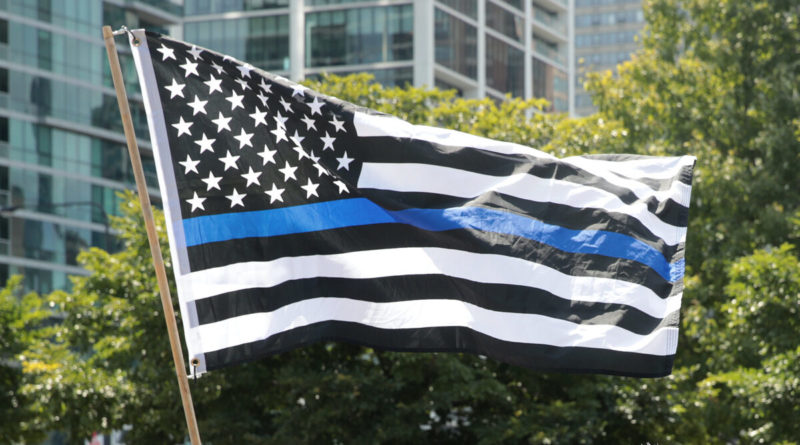 The policy requires the flag and its replicas in patch and sticker form to be removed from all police station lobbies, as well as police uniforms and department vehicles, said LAPD Lt. Letesia Ruiz.

The directive doesn’t prohibit personnel from displaying the flag in their personal workspaces nor on lockers or personal vehicles, Ruiz said.

The ban follows an initial order by the police chief to remove the flag from the lobby of the Rampart Station earlier this month.

Moore ordered the ban after receiving a complaint from an unnamed person that the flag is offensive, he stated in a department-wide memo last week.

The person believed the symbol “signifies support of extremist views such as those espoused by the Proud Boys and others,” Moore said in a statement emailed to The Epoch Times.

“While I do not personally view the ‘Thin Blue Line Flag’ in the same manner as the community member and others, its display in our public lobbies can be divisive,” Moore stated in the email. “It’s unfortunate that extremist groups have hijacked the use of the ‘Thin Blue Line Flag’ to symbolize their undemocratic, racist, and bigoted views. Flags serve as powerful symbols with specific meanings.”

The ban has drawn criticism from defenders of the popular flag and sparked rumors that new Los Angeles Mayor Karen Bass had initiated the ban, a claim she has denied.

“I love seeing our LAPD in the national news. Except this time for the most embarrassing reason. Calling Chief [Michel] Moore weak for caving to the communist Mayor. Grow a spine, support the troops and law and order,” retired LAPD Homicide Detective Sal LaBarbera wrote on Twitter.

Former Los Angeles County Sheriff Alex Villaneuva also criticized Bass in a text message to The Epoch Times, stating she is “trying to burnish her anti-law enforcement credentials,” he said.

“While I understand the limits that chiefs of police operate under, I disagree with the characterization of the thin blue line flag as divisive,” he said. “That is tyranny of the fringes of society, trying to impose their views on the overwhelming majority who care for and respect law enforcement.”

Riverside County Sheriff Chad Bianco told The Epoch Times via text message on Jan. 23 that while he agrees with Moore that extremist groups have hijacked the use of the thin blue line flag, he said “the extremist groups he should be talking about are the socialist, anti-law enforcement left who have hijacked the real meaning of the flag in order to mislead and divide our citizenry while vilifying law enforcement.”

In the 1950s, LAPD Chief Bill Parker routinely explained “the thin blue line” represented law enforcement as the barrier between law and order and social and civil anarchy, Bianco pointed out.

He said last week the thin blue line flag was proudly displayed by mourners lining the streets and freeway overpasses between Lake Elsinore and Perris to pay tribute to slain Riverside Deputy Sheriff Darnell Calhoun during a procession from the hospital where Calhoun died to the Coroner’s Bureau.

Calhoun, a black man, was serving in the line of duty when he was shot on Jan. 13. He died later that evening.

At least one mourner displayed the flag at a recent candlelight vigil in Lake Elsinore. Calhoun’s funeral was held on Jan. 21.

Moore said the flag’s original meaning of support for police has been overshadowed by other meanings.

The police chief said that, to him, the flag “presents the honor, valor, dedication, and sacrifice of law enforcement to protect our communities.

“Tragically, that view is not universally held and others have been able to persuade the public it symbolizes racist, bigoted and oppressive values,” he said.

The thin blue line flag is a black-and-white U.S. flag with a single blue stripe in the middle. The term “thin blue line” has long referred to the police, who have historically worn blue uniforms, as the “line” that protects protects people, and separates law and order from anarchy and lawlessness.

Moore acknowledged the Los Angeles Police Protective League, a union that represents officers, has expressed disappointment with his directive.

“I understand the frustration some may feel on this issue,” he said.

An LAPD spokesperson representing Moore, responding to an inquiry from The Epoch Times, said the mayor “had nothing to do with” the decision by Moore to ban the thin blue line flag.

The flag at the Rampart Station was replaced with the American flag days later.

“The lobby of a police station is a public space to best serve all people. Flags other than the American, State and City flags are to not be in the lobby, on a uniform, or marked police vehicle unless formally approved,” the spokesperson said.

Asked whether one complaint about the flag from an unnamed individual should constitute a change in police policy, the spokesperson suggested that Moore hasn’t established a new rule but has enforced a longstanding policy to display only the American flag. The one caller alone “is enough for the Chief to address any alleged grievance,” the spokesperson said.

The chief’s directive conforms with longstanding policies that only approved items for the lobby of police stations, uniforms and marked police vehicles are allowed, according to the spokesperson.

The spokesperson stressed the thin blue line flag is still allowed in the workplace such as roll call rooms and other department areas where the flag’s meaning cannot be misconstrued.

“It is also allowed in public spaces such as memorials and tributes to our fallen as the context is clear and unambiguous,” the spokesperson said.

Moore’s five-year term as chief ends in June, but he has requested reappointment for a second term, writing in a letter to the Board of Police Commissioners in December that there remains “more work to be done” and he has a “strong desire” to continue leading the department. 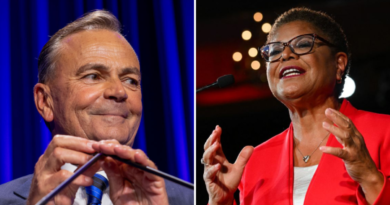